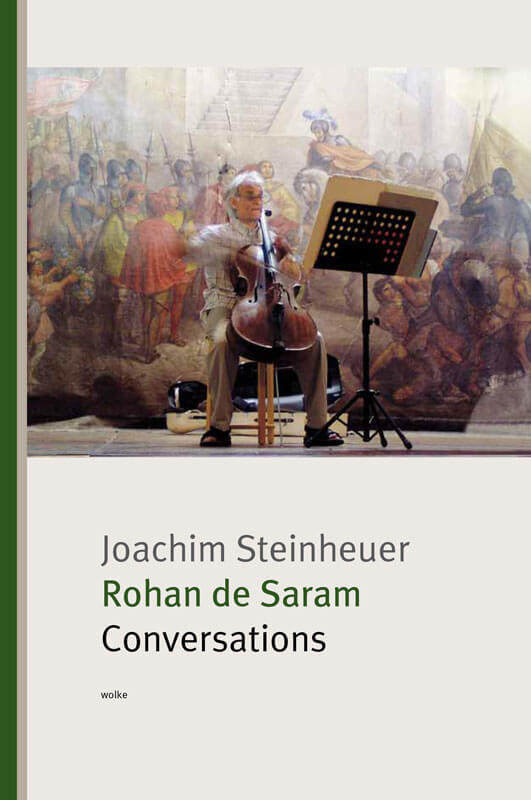 Rohan de Saram is one of the foremost cellists in the contemporary music scene. In the 1950s he studied cello with Gaspar Cassadó and Pablo Casals. During a musical career of almost sixty years as a soloist, chamber musician and member of the Arditti Quartet, he has not only encountered, but also been in direct working contact with almost all of the significant composers during this period. From his particular focus he has experienced, witnessed and also actively participated in the musical history of the last decades from the inside view of a performing artist who has been and still is involved in bringing to life the most advanced innovations in contemporary music. Besides his musical achievements Rohan de Saram“s thinking extends to a broad knowledge of and insight into manifold aspects of the music of various cultures, performance practices of different periods as well as vivid interests in literary, philosophical and religious questions.
In these conversations with the German musicologist Joachim Steinheuer various aspects of Rohan de Saram“s career are covered. The first four chapters deal with the earlier part in chronological order, starting with his beginnings as a musician during his childhood in Sri Lanka, the periods of study in Florence and Siena and with Pablo Casals in Puerto Rico, an extended stay during most of the 1960s in the varied and stimulating cultural atmosphere of Oxford, and the first decisive steps towards contemporary music during the 1970s in London. The later chapters do not aim at a chronological order: two of them cover the period of more than 28 years during which Rohan de Saram was a member of the Arditti Quartet and focus on the extremely varied repertoire of the Quartet, new technical demands, the development of particular working methods during rehearsals and the contexts in which the Quartet appeared; another chapter is devoted to his musical work with other musicians during these years and also after he left the Quartet in November 2005. The remaining chapters focus on different aspects of music and music making that are central to his repertoire and to his thinking, dealing with some general issues in contemporary composition, his work with both contemporary composers of Asian descent and European composers who integrated ideas from the East in their compositions, with his experiences in improvisation and with some general concerns regarding spirituality and music.

Joachim Steinheuer has taught Musicology at Ruprecht Karls-Universität Heidelberg since 1996. His publications as author, co-author and editor include works on Monteverdi and several of his Italian contemporaries such as Merula, d“India, Rasi and Strozzi, on Purcell, Vivaldi, Haydn, Mozart, Schumann as well as numerous contributions to the Encyclopedia Die Musik in Geschichte und Gegenwart.
Since 2002 he has been one of the organizers of the Biennial Festival of Contemporary Music LINKS in Heidelberg and since 2011 he has been artistic director of the festival Musica Insieme in Panicale (Umbria) together with composer Klaus Huber.