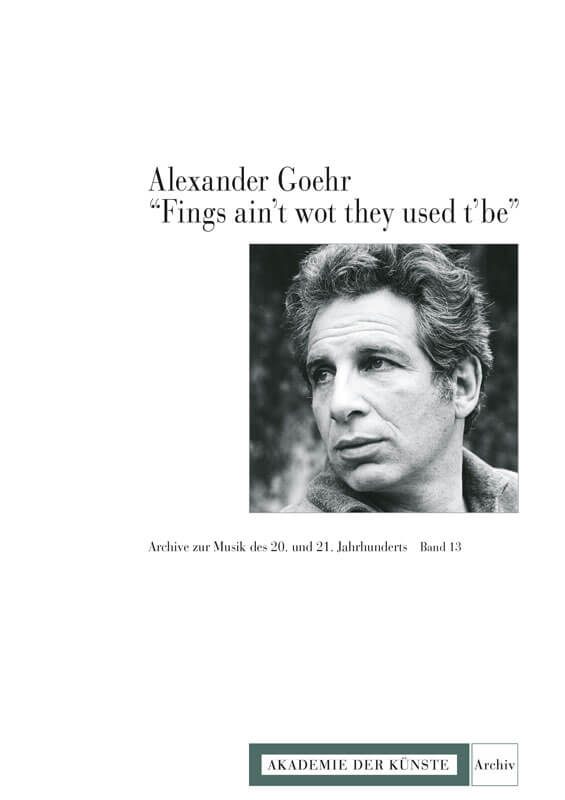 Born in Berlin in 1932, Alexander Goehr grew up in England where his father Walter Goehr, a former student in Arnold Schoenberg’s master class, conducted a broad repertoire ranging from the Monteverdi Vespers to Messiaen’s Turangalîla Symphony. Monteverdi and Schoenberg, the old music and the new, were the musical household gods that would guide Alexander Goehr throughout his compositional career.

In 1955, after his studies in Manchester where he formed the New Music Manchester Group with Peter Maxwell Davies and Harrison Birtwistle, Goehr went to study with Olivier Messiaen in Paris becoming good friends with Pierre Boulez and experimenting with the latter’s bloc sonore technique. But he soon parted from the strict serialism he thought had become a cult of stylistic purity in which reference to any other music was taboo. In Goehr’s eyes, a musical avant-garde that was not deeply rooted in tradition seemed not to be worthwhile.
In 1956 Goehr’s Fantasia was premiered at the Darmstädter Ferienkurse, a year later he had his first big success in England with the cantata The Deluge. Goehr’s first opera, Arden Must Die, was premiered at the Hamburg Staatsoper in 1967. A year later he founded the Music Theatre Ensemble for which he wrote the Tryptich that represented a synthesis of European and Japanese musical and theatrical traditions. He also wrote numerous works for various ensembles both vocal and instrumental, ranging from chamber music to orchestral works, from Lieder to music for choir.
Goehr has taught composition in several countries on four continents, including Yale University and the Central Conservatory of Music in Beijing. From 1976 to 1999 he was Professor of Music at the University of Cambridge where George Benjamin, Julian Anderson and Thomas Adès were among his students. Goehr’s latest works are the opera Promised End after Shakespeare’s King Lear and Turmmusik for baritone solo and orchestra. Since 2010 his archive has been held at the Akademie der Künste, Berlin.
Contents:Werner Grünzweig: In Dialogue with the PastPaul Griffiths: “…es ist nicht wie es war…”. The Music of Alexander GoehrAlexander Goehr: Learning to ComposeCatalogue of the Music Manuscripts in the Alexander Goehr Archive.